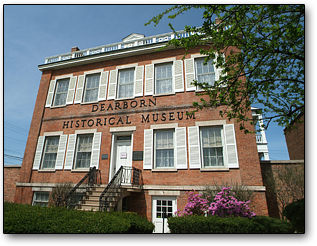 Visitors to the Dearborn Historical Museum are often surprised to discover the multiple storylines of our local history, even if it’s just the revelation that we weren’t always the “Home Town of Henry Ford.” Long before that, in 1786, farmers began to settle along the River Rouge, and some 50 years later, a village spread out around a U.S. arsenal that eventually supplied arms to Union troops during the Civil War.

The former Detroit Arsenal at Dearbornville (1833-75) carries on today as home to the two main buildings of the Museum -- the 1833 Commandant’s Quarters and (left) the 1883 McFadden-Ross House, originally the Arsenal’s 1839 Powder Magazine.  The Museum also oversees a third historic building, the 1831 Richard Gardner House.

The Commandant’s Quarters, one of Michigan’s most historically significant brick residences, now displays period furnishings and a scale model of the old Arsenal grounds.

The McFadden-Ross House features exhibits, a meeting room and an archive that includes genealogical resources and a wide range of photos, papers and books.

The three-room Gardner House, Dearborn’s oldest building outside the confines of Greenfield Village at The Henry Ford, provides a glimpse into simpler times. It originally belonged to a boyhood chum of Henry Ford.

A variety of ongoing Museum programs also explores Dearborn’s history. The Museum offers monthly lectures, publishes the quarterly Dearborn Historian and hosts such special events as an annual antique appraisal clinic. For more than 1,300 schoolchildren in Dearborn and other communities, field trips to the Museum every spring provide second-graders with a chance to observe what life was like for early settlers. And for those with a hobby or special interest, the nonprofit Museum Guild of Dearborn and its two dozen social and civic clubs meet regularly in Museum buildings.