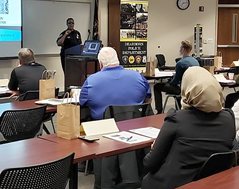 In addition to their Community Policing responsibilities, officers are also assigned crime prevention duties. The concept of crime prevention consists of steps you can take to limit your chances of becoming a victim of a crime. Crime Prevention consists of personal safety, identification theft awareness, and fraud prevention seminars. These seminars are held for any size group to include schoolchildren, church groups, neighborhood associations, and large community gatherings. During the past year, the Community Policing and Crime Prevention Unit presented 85 safety seminars. To augment the distribution of information related to these presentations, Public Service Announcements have been added to the City of Dearborn’s website and on the City of Dearborn Television channels.

On August 6, 2019, Community Policing Officers participated in the National Night Out on Crime sponsored by Target and Beaumont Health, with thousands of citizens in attendance, and served as our largest National Night Out event to date. The Neighborhood Watch Program enlists the participation of citizens in cooperation with the police department to reduce crime, create alert neighborhoods, and facilitate reporting of suspicious activity.